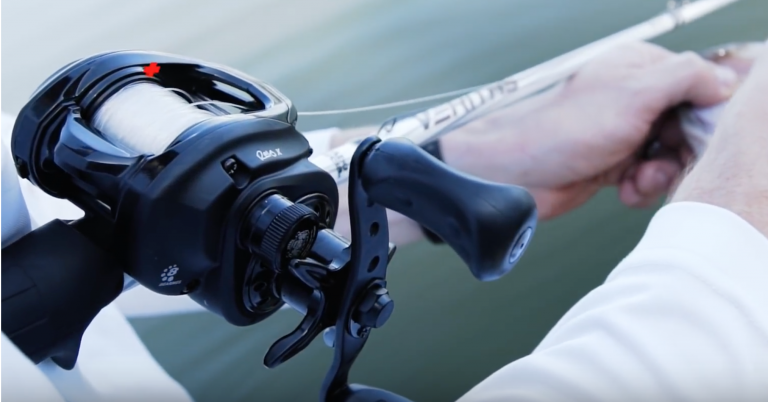 Best multiplier reel for boat fishing at a Glance:

Best multiplier reel for beginners at a Glance:

What is a multiplier reel?

The multiplier reel enables with a single handle turn to lead to multiple reel reverses/turns. And, probably, you have already heard that the range of throwing with its use does not depend on the line or rather – its thickness. Also, this reel can boast its huge pulling power and sensitivity. And if you want to understand in details fishing with the use of multiplier reels and select the right model, then this article is for you.

The multiplier reel should be chosen:

Multipliers today are mainly used for marine fishing, where long-range throwing is required, thick fishing lines are used and heavy trophies are caught.
The main characteristic of the multiplier is the gear ratio, which for freshwater bodies is usually 4.7-5.2. The power of multiple reel depends on this ratio.

Fishing methods and techniques with the use of multiple reels:

All these types of fishing involve heavy jigs to catch large predators. The power of the multiplier and their ability to work with rough gear is just indispensable, and other types of reels cannot be compared to them.

All multiplier reels can be divided into large groups by purpose and design.

For their intended purpose they are provisionally are broken up into:

Multiplier reels for casting are lighter, simplier and cheaper. They should not be as powerful as the ones for trolling. Some trolling reels are equipped with a line counter.

By design the multiplicators are divided into:

Round reels are heavier and more powerful, have impressive pulling and general power. Mostly all models of such multipliers are used in power fishing. They are used in trolling and heavy spinning, have cylindrical form.

Low-profile reels are designed for light and medium weight jigs as well as for fishing in cast. They are applied in spinning – jig, twitching, other ways and techniques, where the use of multiplier is justified. They are rarely used in sea fishing, have a thinner friction and are less large-format.

Low profile multiplier is the leader among light weight ones. The low profile insures a smaller angle of the line inflection, which reduces the line friction when passing it through the rings, this affects the flying distance.

Low profile multipliers are called catchy fishing reels.
The only disadvantage is the low body profile which does not allow to set up power gears, that is, gears, with a large area of contact engagement.

Most of low profile multipliers cost at least 50 dollars and are designed for jigs with the weighing from 1 to 30 grams – with a cord 4 – 15Lb. That means, if you need to catch using light gigs – set up low profile reels.

It should be noted, that the profile type (low or round-type) does not reflect the realistic weight category of the multiplier.

Shooting “classic” is the type of reels which are in terms of production volumes inferior to the mighty models for Big Game but are well suited for our conditions.
These are medium class reels designed for jigs weighing 15 – 80 grams.
They are quite powerful and can throw heavy jigs over long distances.

After all, bearings in such models are not the most high-speed. Taking account of the mechanism simplicity it is easier with settings at medium speed.

The multiplier reel is much easier to use, but this product is equipped with certain systems ensuring its reliability and balanced operation. Let’s list the main basic units and systems.

The reel braking system is crucial.
Setting up of the multiplier reel starts with adjustment of the friction brake.

All multipliers are equipped with two types of friction mechanisms:

Setting up of the first one is necessary for a cardinal jig change with different weight, sailing and size. The second friction is necessary when braking the fishing line during casting. It does not require frequent outfit and is usually adjusted immediately after purchase or during the first fishing. Then it is not adjusted for a long time.

It is necessary to set up multiplier reels with maximally exposed centrifugal weights. Then, as necessary, you can switch off one pair by another one choosing the optimal operation of the friction. It is necessary to achieve that after the splashdown the multiplier itself stopped spinning. But it is required not to “overpull” the friction mechanism when the line will become slack with effort.

We recommend these multiplier reels for beginners:

What is the right way to adjust the brake for a beginner?

Put the magnetic one (or centrifugal) on exactly a half the braking force: magnetic one (10 point scale) on 5-6, in centrifugal split a half of brake disks. Mechanical one is adjusted so that when you hold the spinning parallel to the water, the jig slowly descends to its surface. Further, you just tuning the brake force under the conditions of catching using “thin” brake but without touching “thick” one. However, soon you will realize that you can throw without a “thick” brake.

However, all the disadvantages of multiplier reels are more than compensated by their reliability, impressive power, durability and sensitivity of casting gear in general.

The multiplier reel is durable and wear-resistant. It works confidently under extreme loads, withstands increased loads and is suitable for complicated fishing conditions. For example, when holding in the supports, the multiplier enables you to force playing in order to prevent tackle tangling and breaking, when the cut predator can hide under the snags or flooded tree.

Let’s be honest: Abu Garcia Pro Max LP is not the most technologically advanced and efficient multiplier reel recommended for casting at the moment. However, it does much more, insuring consumers a balance of value and quality. In addition to excellent customization the model is equipped with an aluminum spool and a reliable graphite body, inside which there is a gears with a gear ratio of 7.1:1. There are seven corrosion-resistant rolling bearings with a decent warranty life, as well as one standard roller.

The weight of Abu Garcia Pro Max LP is only 207 grams — not a huge increase to the total rod weight and, as a result, low level of fisher fatigue from periodic bait casting. In the end, we get an impeccable model, the cost of which is fully justified by the catchment and all operational aspects.

Cons: lacks a little in power.

Another representative of Shimano in the ranking is Shimano Citica 201I multiplier reel, which has been widely used in casting fishing. Under the lightweight aluminum body, which has a spectacular shape and silver-orange colour, there is a simple but very high quality mechanism with X-SHIP gears, Star Drag brake and implemented cast control system . Friction brake can withstand the force of 5.5 kilograms — good result for a reel designed to catch a predator in small reservoirs.

Since the model was presented to the general public in 2016, the anglers managed to conduct a number of real “stress tests”, the results of which were very positive. The main portion of praise was to the accuracy of Shimano Citica 201I action and its “charge” on the fight, which is called, to the last. It is a pity but not everyone can afford this reel.

Cons: does not cast very far.

This premium segment fishing gear is actively used in sports competitions as it is suitable for various types of jigs and fishing. This super lightweight and easy to use bytester is placed in a steel case. There is nothing better than this! Its weigh is only 155 grams, placed in a steel frame of magnesium and steel sidewall, so it seems like you have just air in your hands! Super compact housing and full-size gearbox protection, plus incredible 12-bearing system (11 ball bearings + 1 Infinite Anti-Reverse roller bearing system (instant brake back) enables the ultra light dural reel to work exceptionally perfectly.

The design of the “curved” handle and the “asterisk” brake give a perfect start to worm gear and insure unmatched power. Add to this innovative MagforceV braking system, with the help of which the fisherman achieves an unrivaled throw without fear of “anti-reverse”.

The famous series of reels from Swedish manufacturer has a logical continuation in the form Ambassadeur C3 – an outstanding model of multiplier reel, created taking into account the developments and enormous experience of Abu Garcia engineers. Shining from the outside, the model conceals its true potential in the structural part, where the advanced mechanism and as many as seven ball bearings (+ one roller) are located. The Carbon Matrix system, consisting of six-beam centrifuge brake with a switch mechanism, is responsible for the braking effect and smoothness of adjustment.

If you consider this model from the point of view of ergonomics, in general, you cannot be distinguished anything with a negative comment. As noted by fishermen, the reel is perfect for trolling on river reservoirs, since neither forest capacity nor friction brake is suitable for “attempt” on marine inhabitants.

If Shimano Corvalus 301 is slightly behind the main opponent in terms of the design and the applied mechanisms, the parameters of design and appearance can get the most laudable feedback. Fortunately, fishermen love it not just for this: for river trolling such a reel will be perfect.

The main factors influencing the choice of this model is the extreme working resource. All people who are not indifferent to fishing are aware of the fact that Shimano produces high-quality fishing equipment, putting into it not the largest list of parts and miniature units. In this case, only four ball bearings are used in friction pairs — as tests show, to ensure the proper characteristics no more is not required. The spool of the multiplier reel is designed for 240 meters of 0.3-mm line — insufficient for sea fishing but quite acceptable for river fishing.

Based on the results of a brief review, we can conclude that SHIMANO CORVALUS 301 will be a really good purchase, especially taking into account its low cost.

In pursuit of the championship in the category of fishing reels, DAIWA often goes far beyond the main opponents. However, such measures become either redundant or useful, but not accepted by a wide (and unprepared) audience. In the case of DAIWA Accudepth Plus 27LCBW the role of such “excess” is played by the line counter set up on the multiplier — an interesting but very stupid thing for the fisherman, giving nothing more than rapidity.

Abstracting from trifles, we can say that constructively the reel is made to be rather reliable.

For sea fishing it, of course, is not enough, but for perch and pike fishing on a wide river it is perfectly suitable. Unfortunately, additional “envelopes” added to the cost of Accudepth Plus 27LCBW some money, which in some way pushed away even true company adherents. However, objectively, the reel puts out of business the majority of models which are in this market segment.

The best multiplier reel for boat fishing with line counter

Below there are TOP-5 brands of multiplier reels: 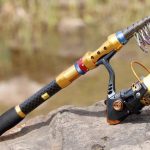 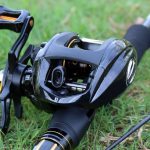 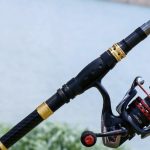 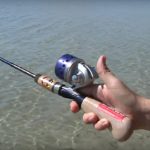 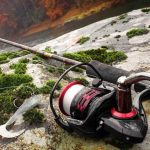